TROPHIES ASSOCIATED WITH THE CLUB

The Hussey cup was donated in 1910 approx by  Mr Arthur V Hussey a chemist with the British Aluminium Company at Foyers.  It was to be contested annually between Foyers & Stratherrick and any other team in the District should one appear.

With two games home & away scores cumulative, in the event of a draw after both games a deciding game was to be played.

These games were so very keenly contested, with every able bodied person in the district attending the matches that one noted local referee Dan Bethune refused to do any more due to the roughness of play and for fear of his own safety.

1n 1923 it was mooted that the cup be given over to  juvenile games  with a competition involving Foyers, Stratherrick, Strathnairn, Fort Augustus and Glenurquhart  schools but this idea never happened, and in 1925 it was decided to adhere to the original concept .

In the inaugural year 1910 the scores were at Glenlia,  Stratherrick 3 Foyers 1, in the return match at Dalcrag played on a Thursday during February, the score was Stratherrick 2 Foyers 0, securing the cup for Stratherrick.

The cup was last played for in about 1950 approx  with Foyers winning 5-2 at  the Factory field after game at Stratherrick at Murnich which they also won to lift cup.

The cup after being missing for nigh on seventy years was presented back to the club in September 2010  by  Dennis Emeny, and is in possession of the Club Committee

The cup was donated in 1911 approx by Jack Ledingham a tinsmith in Foyers to be contested by two teams, one of which consisted solely of members who had the prefix Mac in their surname -- THE MACKS.   The other team was made up of all other surnames was called-- THE NON MACKS or as their byname went locally THE CROPS.   The Leddingham cup was contested annually prior to the shinty season ,dependant on the prevalence of MACKS in the district at one time . winners of the cup as far as known were ( taken from inscription on Cup) NON MACKS 1911-20,20-32,47. MACKS 33. The last time the cup was contested for was the late forties and the MACKS were victorious

The Crops 1947 with Leddingham cup

This Cup was donated to the Strathnairn Camanachd Club in 1923 by W J Cameron  Flichity . Possible given at the formation of the club , as it entered  national and local cup competitions for the first time ever in 1923-24 season .  Just who contested for the cup is open to speculation, games against near neighbours Stratherrick or Strathdearn spring to mind or it could have been between two different districts of Strathnairn . By 1927 the cup was utilised for the Strathnairn games which co-incidentally were run by the Shinty club and presented to best local athlete overall in the athletic events. The trophy having been won three times by Peter Brown Glenbeg, it was withdrawn from competition and presented to Peter to mark the achievement  . It has remained in the Brown family ever since,  Peters son John who played in the Sutherland cup winning Boleskine team of 1966 is the current family custodian .

The Trophy was donated by  Jack Stuart  from Launceston Tasmania in 1962, to be awarded annually to the finest sportsman in the Boleskine team. The players picked the person deemed to be sportsman of year, the recipients as far as known are  1962-63 William Stoddart, 1963-64 Charlie Kennedy , 1964-65 Billy Mackay, 1965-66 Teep MacDonald & 1970-71 Joey Smith. 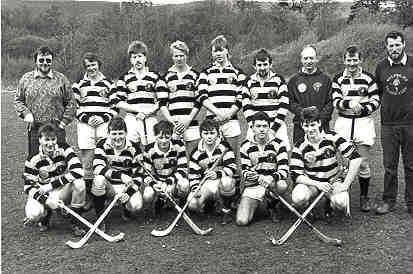 The Winners are as follows

f you have any more information on these trophies, or others associated with any team from our area, please send E Mail with relevant information.